For participation in the event, kindly send a mail to [email protected] and register for the event.
Access to conferences/ seminars/ webinars are provided to the public irrespective of gender, ethnicity, disability etc. 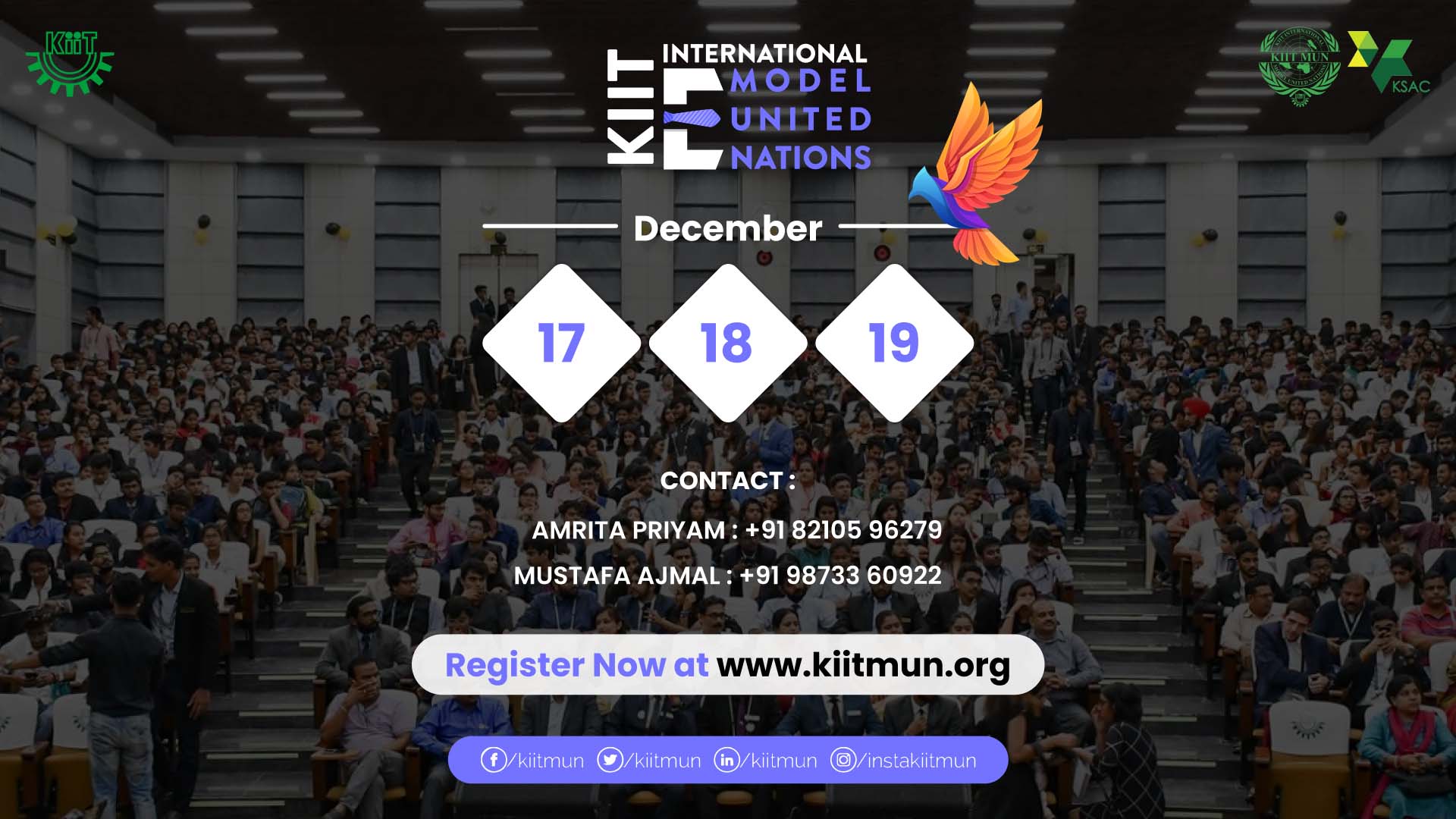 KIIT International Model United Nations, which was founded in 2013, is one of the largest simulations of the United Nations across the globe, coordinated by KIIT University. KIIT International MUN 2016, being the largest MUN hosted across the globe with around 2500 delegates engaging themselves has helped us move forward with such strong reach ever since, after which KIIT e-MUN was formed in the wake of the pandemic. KIIT E-MUN has collaborated with many organizations like Médecins Sans Frontières, CURE International, Heidelberg Model United Nations(HDMUN), and many other prestigious organizations.

The enormous world is divided by its selfish interests and we strive to make it smaller, uniting it in the process through participation from not just the renowned institutions and organizations in our nation, but from countries and nations from every nook and corner of the world.
With a beautiful legacy, KIIT International MUN looks forward to be organized with more devout enthusiasm and participation than ever before, taking into account each success, and looking out to ameliorate and uphold the very spirit of a united world.

KIIT International Model United Nations is one of the largest simulacrum of the United Nations across the globe. It is one of the most remarkable organizations that had been established by the students of KIIT in 2013. Since its inception, the syndicate has plans to set its aims a little higher to achieve the goal and indeed gains success every year in the events hosted. KIIT International MUN 2016 was the largest MUN hosted on the planet that was honoured by the participation of more than 2,500 delegates. At KIIT International Model United Nations, we bring in association from not only the eminent institutions and organizations of India but also from countries that span every corner of the world.

The simulation serves as a significant opportunity to socialize with delegates coming from different walks of life and learn the nuances of diplomacy.
The Executive Board Members of this grand organization serve as an emblem of leadership and dedication to the delegates that join us every year. Every year, the consortium dedicates itself to holding a three-day event filled with vigorous discussions and debates along with tremendous research, which helps us all achieve a better version of ourselves as human beings at the end of the conference.

With cultural performances, stand-up comedies, and networking dinners- KIIT International MUN does not just stress peace and promote diplomacy but also helps the individuals socialize through the large gathering, helping them in uniting with other individuals of different cultures and geographical orientations. In the past two years, the pandemic has changed our lives to an inexpressibly huge extent, henceforth changing the meaning of adaptability. The pandemic has brought difficult times for us all, posing a greater reason for us to gather and discuss on a platform, and thus, we brought the idea of e-MUN, a solution to help ourselves move forward as we brave through these difficult times. The world is indeed recovering from such troubled times, but till then, stay safe, and enjoy the conference in the comfort of your own homes.