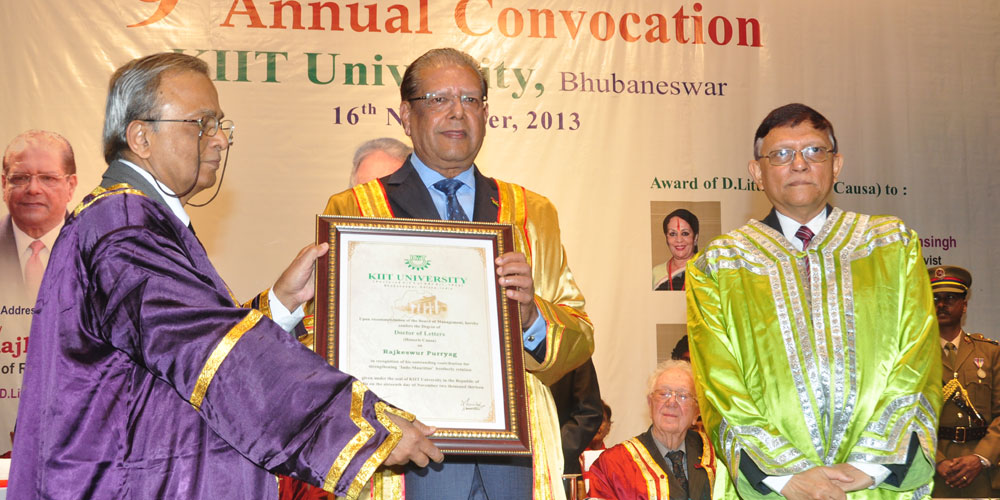 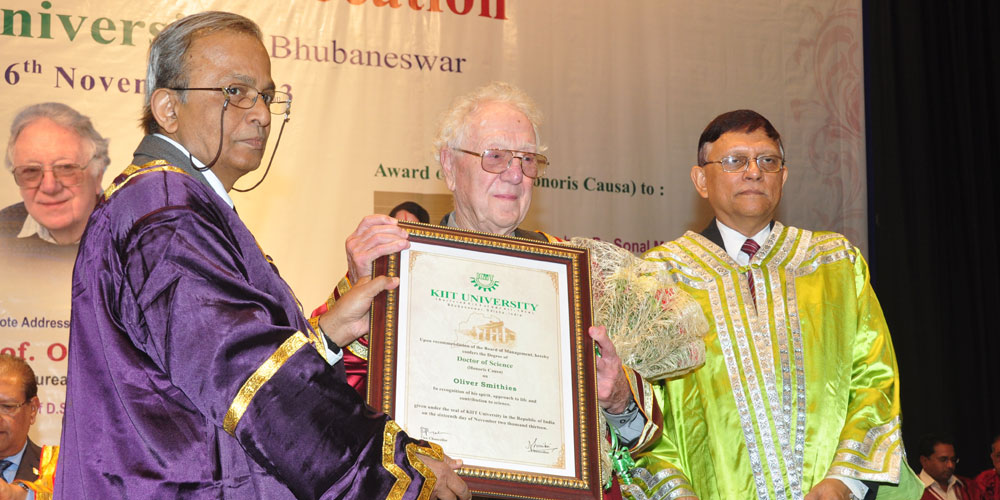 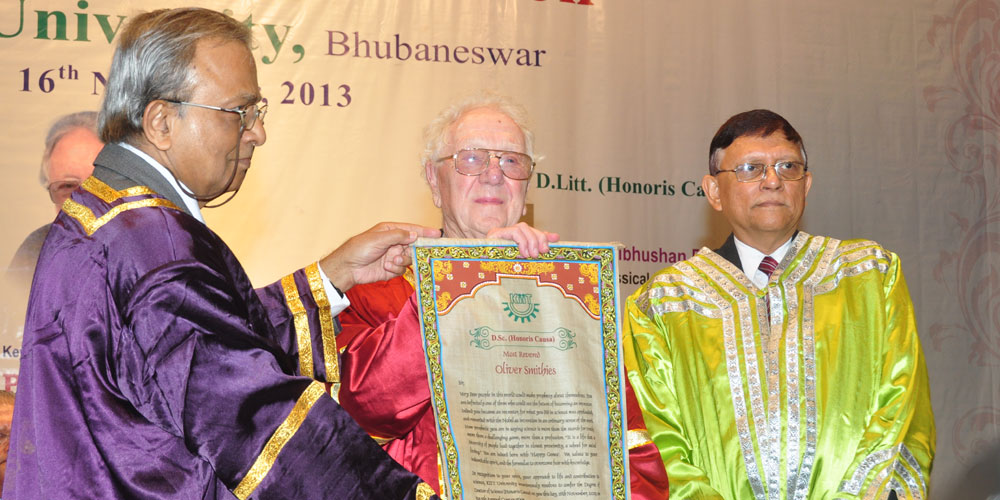 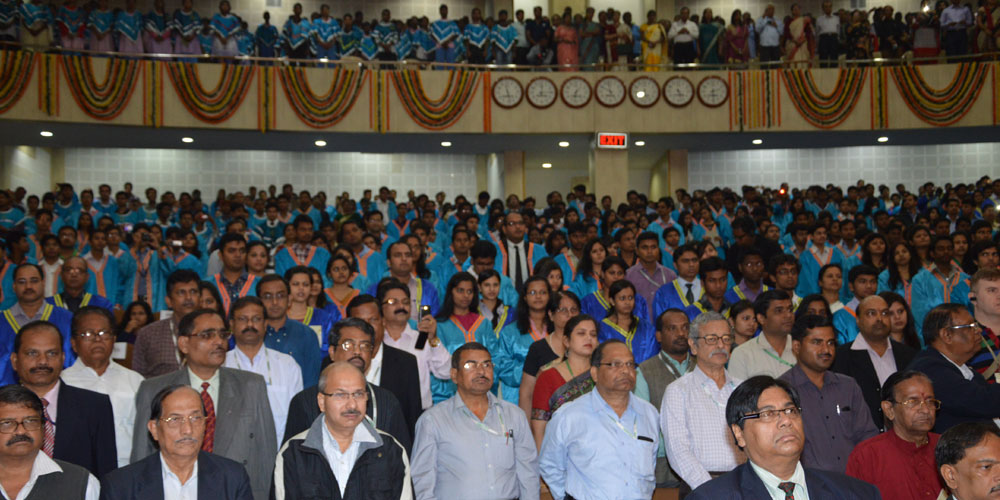 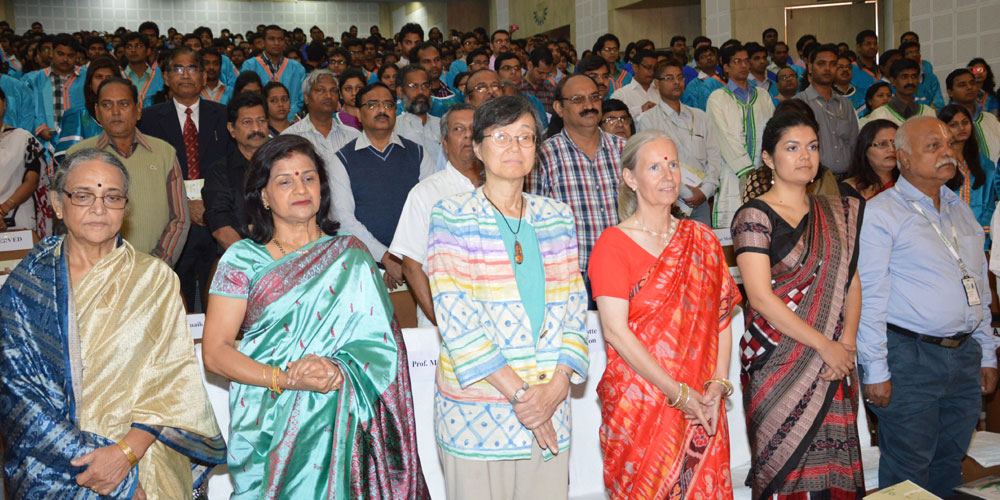 Total 2769 students of 2012 – 13 graduating batch of KIIT received their degrees at its 9th Annual Convocation in the presence of His Excellency Mr. Rajkeswur Purryag, GCSK, GOSK, President of The Republic of Mauritius and Prof. Oliver Smithies, Nobel Laureate (Physiology or Medicine-2007) on November 16, 2013. The University conferred Honoris Causa Degrees of D.Litt. and D.Sc. on Mr. Purryag and Prof. Smithies respectively.

Dr. Pradyumna Kumar Mahanandia, Eminent Artist, Sweden was also conferred degrees of D.Litt. (Honoris Causa) on the occasion. The honour was conferred in absentia and received by his wife Mrs. Ann-Charlotte Mahanandia, on his behalf.

Delivering the convocation address, the President of Mauritius, on behalf of the Government of Mauritius, offered condolences to the victims of cyclone Phailin and commended Naveen Patnaik Government, Meteorological Department and people of the State for efficient management of this natural disaster. “People of Mauritius have special attachment with and profound respect for India as it is the land of our ancestors”, said Mr. Purryag, whose own grandfather had migrated to Mauritius from a village in Bihar near Patna to work as indentured labourer some 150 years back. He dedicated the honour he received from KIIT to “unbreakable friendship between India and Mauritius”.

Speaking on the value of education, he said he shares the notion of highest importance of education with KIIT and KISS Founder Dr. Achyuta Samanta. Change is inevitable law of nature and education brings change, he stated. Dr. Samanta has successfully used education as a tool to fight poverty and inequality, Mr. Purryag said referring to Kalinga Institute of Social Sciences (KISS), the world’s largest institute for tribal children, where 20,000 underprivileged students are receiving education from kindergarten to postgraduate level in a fully residential setting free of cost. He will be the global ambassador of KISS, he declared.

“My visit to KIIT and KISS reconfirmed my belief that education is not preparation for life, but it is life itself. I commend youthful energy of KIIT . It is one of the foundations of future. It also reflects the spirit of rising Odisha”, the Mauritius President said, while offering his best wishes to the graduating students. Education, inequity, marginalization, poverty, sustainability, empowerment, peace and environment are central to Dr. Samanta’s work, the President stated, maintaining that it is a highly commendable achievement in today’s world which is largely driven by self interest and pursuit of wealth. “His work embodies Hindu notion of ‘Seva’ – service to mankind – and he will remain an example to emulate”, he added.

In his keynote address, the Nobel Laureate advised students to be like a child and continue learning. “You are getting your degree today, but you have not finished learning. Learning is a lifelong process”, said Prof. Smithies, a British-American geneticist who won Nobel Prize in Medicine in 2007 for his discovery of principles for introducing specific gene modifications in mice by the use of embryonic stem cells. He expressed gratitude to KIIT for bestowing the award of D.Sc. honoris causa on him.

Expressing best wishes to the graduate students, Prof. N. L. Mitra, Chancellor, KIIT , in his presidential address, told students that the current generation is facing dual challenge of resolving problems as well as building up a new character of confidence. He wished them “a colorful life of a successful enterprise and happiness in inner self” and advised them to try to make their life meaningful to thousands of others.

Dr. Sasmita Samanta, Registrar proposed the vote of thanks.